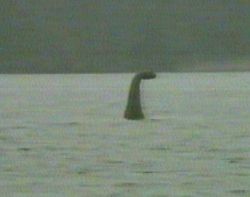 Ok, ok…at least it’s not April first so this may have legs (so to speak). A brand new video of the famous Loch Ness Monster has been released. Click here to get the full report.

Gordon Holmes was carrying out experiments at the famous loch when by chance he happened to spot a strange creature in the waters. Now his film of the incident is causing a sensation.

The legend of the Loch Ness Monster dates back to 565 AD when St Columba was said to have seen a strange water monster in the loch. Tales of Nessie regularly surface, but she is a symbol of Scotland that is so recognised across the globe that when there are any new sightings reported it causes a frenzy. more>>

What do you think it is? Hype just before tourist season? Is this something real? What is it?

This entry was posted on Friday, June 1st, 2007 at 2:11 pm and is filed under Paranormal. You can follow any responses to this entry through the RSS 2.0 feed. You can leave a response, or trackback from your own site.