As I continue to read my copy of Dan Brown’s The Lost Symbol and as a follow up to my last post “The Real ‘Lost Symbol’”…I’ve come across something that I find very peculiar. If you or someone you know can shed some light on it, I’d appreciate your comment below.

LCN is a 24-hour French Language news channel (like CNN but for Québec) based in Montréal. I usually watch the channel before I start my day to catch up on some of the local and regional news. Karine Champagne and Jean-François Guérin are the hosts of the morning show LCN Matin, pictured below.

What I’ve noticed is that LCN as a usual part of it’s set design, uses a very ‘particular’ photograph. I noticed this before but since my visit to Washington D.C. over the summer and since my investigation into the secret symbology all over D.C. I’ve come to recognize this photograph..as the inside of the dome of the U.S. Capital building! What was the set desinger thinking using the symbol of the U.S. government as part of the set for their 24-hour news service?!

Have a look at the 2 shot below, behind (and around) Jean-François’ head, in the top right corner you can make out the detail: 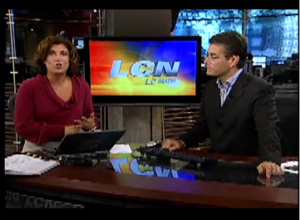 This is also used for on-set contributors, see below: 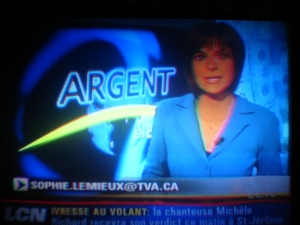 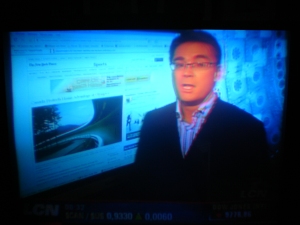 News from the web segment with dome in background 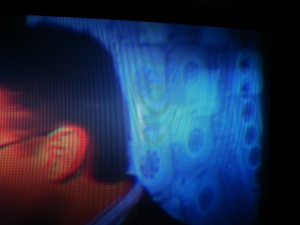 Compare these images to my photograph of the inside of the U.S. Capital building dome below. Do you think they know something that we don’t…or should?

If this indeed supposed to be soe sort of “Stargate”, or “dome of illumination”, why are they using it in this way? 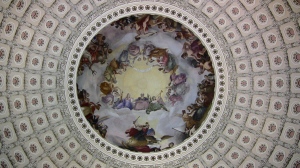 Looking straight up into the U.S. Capitol building dome 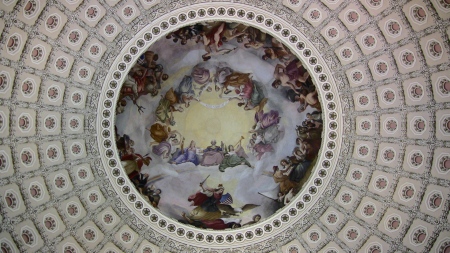 “The Apotheosis of George Washington” looking straight up, inside the U.S. Capital Building dome.

This past summer I took my family on a 10 day 3 city tour of the U.S. East coast, one of the stops was in Washington D.C.

Aside from having family living in the city and thus having a long relationship with the District and aside from wanting to finally introduce my kids to the treasures in the various Smithsonian museums (the Air and Space is my favourite), I have been following the work of William Henry and he recently suggested a closer look at the inside of the dome of the Capital building which I was eager to do. One of the HD pictures I took while I was there is above, click it to zoom in.

William Henry is an investigative mythologist who has decoded something very interesting about the U.S. Capital building the focus of which is on the fresco, up there in the dome called “The Apotheosis of George Washington”. My tour guide brushed it off as a tongue in cheek ‘glorification’ of George Washington, but upon closer inspection it becomes obvious that it is far more than that!

“…this fresco depicts Washington as a god-man. Christian art portrays Jesus sitting on a rainbow and enthroned exactly the same way. The sun is a symbol of Christ from the prophecy of Malachi 4:2 “But unto you that fear my name shall the Sun of righteousness arise with healing in his wings.”

“Tibetan artists use identical imagery to portray their high holy ones (called lamas) who have achieved “The Great Perfection” (Dzogchen). The aim of the Great Perfection is to awaken the individual to the primordial state of enlightenment, which is naturally found in all beings. The initiate’s goal is to integrate enlightenment into all his or her activities and to unite the physical body with the energy of Nature. The supreme realization of which lies in the manifestation of the “Rainbow Body” or body of light.

“This is the meaning behind the symbolism of both Jesus and George Washington sitting on the rainbow. Washington is a perfected human, not only a Grand Master, but also an ‘American Christ’, in tune with his divine nature…” 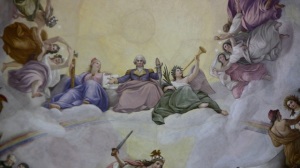 Close up of George Washington on a rainbow throne. 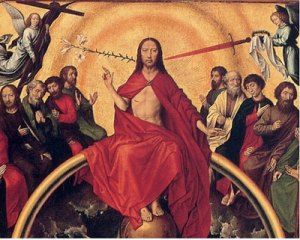 Jesus on his rainbow throne, note the 'sun gate' behind him.

Add to that the empty tomb in the basement of the Capitol Building meant for George Washington and the implications are clear.

You can read the full article The U.S. Capitol and the Temple in Man on William’s website by clicking here.

Now, last night I received a notification email from Amazon that the copy of Dan Brown’s The Lost Symbol which I pre-ordered back in August (saved 50% BTW) has been sent, I should get it by the end of the week…can’t wait. But get this, based on the information I’ve been getting about the plot it has to do with the exact same topic…secret symbols in the U.S. Capital building!

I have a feeling that this is about to get v-e-r-y interesting.